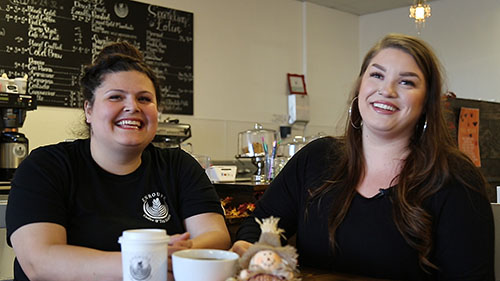 Spend a few minutes with Brittany Salazar and Deni Banach and you’ll understand why Yelp users have rated their coffee shop as the best in the state.

“Let’s bend the rules of an average coffee shop, and let’s just do it,” said Banach, a Seattle native who, along with Salazar, owns Enroute Coffee and Tea House at 15605 W Roosevelt St. right here in Goodyear. “People will say, ‘Can you guys do this?’ I’ll say, ‘Absolutely. Just give me a minute and I’ll figure it out and do it.’”

Banach and Salazar were coworkers at another Valley coffee shop and quickly became friends, but they decided they wanted the freedom of being their own bosses. So, a year ago, they purchased Enroute, where they have implemented a bold attitude toward coffee-making.

Their daring philosophy is one of the reasons Enroute is the top-reviewed coffee shop in the Grand Canyon State, as highlighted by a BuzzFeed story in October.

“Instead of following somebody else’s handbook and rule guide, we wanted to have the opportunity to make our own,” Salazar said. “We offer a wide variety of espresso-based drinks as well as energy drinks. We have a ton of creativity. We love a challenge, which is why we have a dealer’s choice on our menu. You tell us what you like, what you tend to not like, and we create something for you.”

Banach and Salazar work well together because they fill in each other’s gaps. Salazar is the more grounded of the two, while Banach is the risk-taker who enjoys creating new beverages.

How daring does Banach get? Let's just say she's put bacon bits on a latte.

Salazar and Banach knew they were on to something, but even they were surprised when they came across the BuzzFeed story.

“I think we’re still just really humbled by it. We are just excited that people are loving what we’re doing,” Salazar said. “Some of those Yelp reviews that we have are from people that don’t even live in Arizona; they just stopped by on their way to California or they’re on a road trip. So, it just kind of lets you know and reaffirms that you’re doing the right thing, you’re going on the right path.”

Goodyear resident Diana Hoffman began making Enroute her go-to coffee shop in March. Along with wanting to support local businesses, she said Enroute makes some of the best cbeverages she’s ever tasted. For example, Hoffman said she wasn't a fan of white coffee until Banach and Salazar made her a cup.

“They’re very intuitive about their business, offering a lot of different dietary needs for people -- just kind of covering the spectrum with all kinds of different coffee drinks, tea drinks," Hoffman said.

But it’s not just the wide variety of beverages that led to Enroute’s Yelp accolades; it’s their personal touch, which you don't find just anywhere.

“We like to really get to know our guests that we have in on a personal level. They’re like our family. We see them every day,” Salazar said. “We really enjoy that piece of it, and I think it’s one of the reasons people enjoy coming here.”

If you haven’t stopped by Enroute Coffee yet, Banach thinks you ought to change that right away. She promises to make you something you’ll like.

“We just want to have fun,” Banach said. “We really handcraft every single drink to order. We get to know our customers. We give you things that you can’t get anywhere else. We really do break the rules. There are no rules here, honestly.”