'We Want Trader Joe's' campaign kicks off in Goodyear

You told us. We listened.

Through a retail survey, the City of Goodyear asked residents to weigh in on which new businesses they'd like to see in our city. After thousands of responses, the No. 1 choice was clear: Trader Joe's.

That's why Goodyear is getting ready to kick off its first-ever We Want Trader Joe’s promotion. This two-week campaign is designed to let Trader Joe's know that Goodyear residents want their business.

GO HERE to let Trader Joe's know you want them in Goodyear!

"We truly believe that the support and excitement of our residents plays a big role in whether a new business decides to come to our city," said Goodyear Digital Communications Director Tammy Vo. "We know that our residents would rally around Trader Joe’s if and when they decide to come to Goodyear."

On Dec. 13, residents are invited to attend a We Want Trader Joe’s Day, which will take place from 8:30 a.m. to noon at the new Circle K at 1550 N Pebble Creek Pkwy. Goodyear Mayor Lord will read a proclamation at 8:45 a.m.

At the event, residents can submit an official request for a Trader Joe's in Goodyear via the city's iPads. Those requests will be sent directly to the Trader Joe's website. Residents can also sign the city's TOM (Topics On the Move) van as an informal way to let Trader Joe's know that we want them in our city. Attendees will also receive some Trader Joe's-themed swag, including a festive tote bag and holiday ornament. 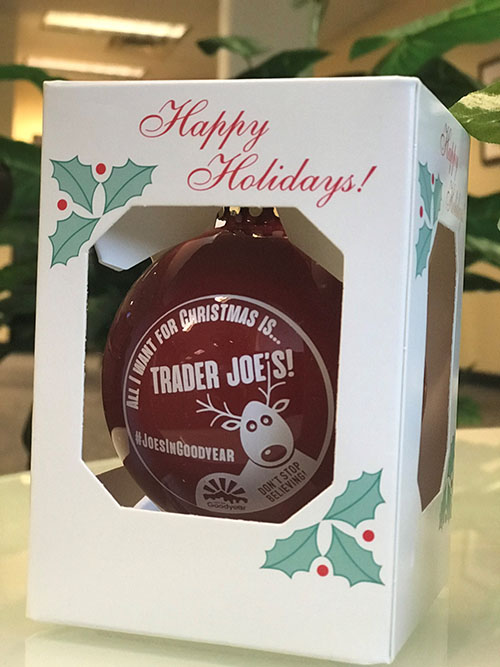