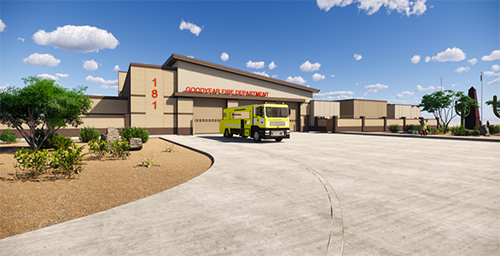 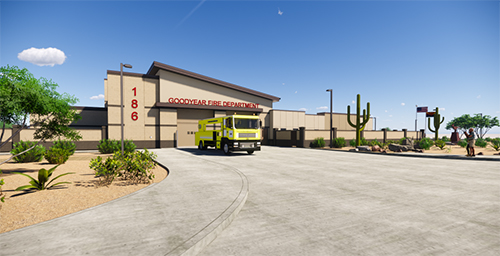 In a strong statement that demonstrates the City of Goodyear’s commitment to public safety, the Goodyear City Council approved funding this week for the creation of two new fire stations that will place a heavy emphasis on firefighters’ long-term health and improving response times for the community.

“They’re very functional buildings, with a focus on improved response times and ensuring the safety of our firefighters inside the station,” said Goodyear Deputy Fire Chief Tom Cole. “Over the last few years, firefighters across the country on average are seeing an increase in cancer diagnoses from the exposures they encounter on fires. So, it’s in everybody’s best interest to help focus efforts on keeping firefighters safe.”

The new stations, 181 and 186, will be designed with more efficient decontamination procedures to ensure the timely removal of any materials that collect on firefighters’ clothes and bodies.

“The key difference between these new stations and our existing stations is that those actions will be more efficient,” Cole said.

Both of the new stations will include the following features:

-A vestibule that separates the “clean” (living) side of the station from the “dirty” (business) side. “Rather than just one door into the station, you’ll see a two-door system with a space to help trap those contaminants, and knock-off carpeting on the ground to knock things off of our footwear, and keep the clean side of the station as clean as possible,” Cole said.

-A personnel decontamination corridor that will allow firefighters to rid their bodies from contaminants as soon as possible. The corridor will lead firefighters directly to an individual bathroom stall upon their return to the station. “We think it’s certainly the most effective way to get firefighters clean and keep the station as clean as possible,” Cole said.

The new procedures, which are based on best practices used throughout the country and the input of Goodyear firefighters, are a complement to Goodyear’s new clean cab fire truck system that requires firefighters to store their gear in separate compartments within fire trucks in order to limit exposure to contaminants.

Station 186 will be a 12,587-square-foot facility located on Willis Road just east of Rainbow Valley Road. Construction will begin in March and is scheduled for completion by the end of 2020.

Station 181 will be a 15,855-square-foot facility located on 143rd Avenue between Van Buren Street and Celebrate Life Way, and will replace the decommissioned station currently located there. Construction will begin in April and is scheduled for completion in early 2021.

Along with the enhanced safety procedures, Cole said Goodyear needs the new fire stations simply to keep up with the massive growth of the city.