The Goodyear of today exists because of the cotton of yesteryear. It was part of the 16,000 acres purchased in 1917 for the Goodyear Tire and Rubber Company by executive Paul Litchfield. Cotton used to make rubber tires for airplanes in World War I was in short supply because foreign sources were in war torn countries or disease ridden. When Goodyear found that Arizona's climate and soil was similar to foreign sources, the company sent Litchfield to purchase land.

The small community that formed as a result of the Goodyear Farms cotton industry first became known as "Egypt" cotton city and then, finally, was called "Goodyear".  The Goodyear Tire and Rubber Company was named in honor of Charles Goodyear, the man who discovered the process to vulcanize rubber in the mid-1800s. The process, which Goodyear discovered by accident, produced a very durable rubber and later allowed the founders of the popular company to form a foundation of success. The community thrived as long as the cotton industry was strong. 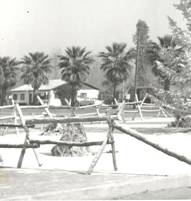 The town of Goodyear was incorporated in November 19, 1946. At that time, the town had 151 homes, 250 apartments, a grocery store, drug store, barber shop, beauty shop and service station. The town became a city in 1985.

However, World War II brought a recovery in the mid 1940's when the Goodyear Aircraft Plant employed as many as 7,668 people at one time. During World War II, Goodyear Aircraft Corporation manufactured more than three million pounds of aircraft frames. After the war, the Naval Air Facility served as a storage base for thousands of World War II aircraft that were moth balled and salvaged.

Goodyear Aircraft Corporation was where some of the famous dirigibles or "blimps" were manufactured that hovered over the Rose and Orange Bowl football games and the Indianapolis 500. Goodyear played a key role in a Thanksgiving Day tradition in the 1950s. A group of women who worked at Goodyear Aircraft in Arizona manufactured the huge balloons of cartoon characters that hovered above floats at the Macy’s Department Store Parade in New York. They were known as “The Balloon Girls.” 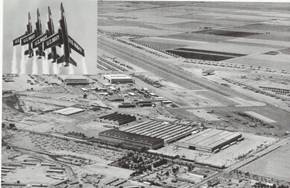 In 1963, a long history of aerospace and defense programs began in Goodyear when the Goodyear Aerospace Corporation replaced Goodyear Aircraft Corporation. That plant was later sold to Loral Defense Systems and eventually evolved by merger and acquisition into the current Lockheed Martin Corporation.

The Litchfield Naval Air Facility was the training base for the Navy Blue Angels aerial demonstration team until 1968. That year, the Navy sold the airfield to the City of Phoenix which named it the Phoenix-Litchfield Airport. In 1986, it was renamed the Phoenix-Goodyear Airport.

In 1986, the 13,000 acres that remained of the original Goodyear Farms was sold to SunCor which developed much of the land into the Palm Valley master-planned, mixed-use community located north of I-10 in Goodyear.

The Three Rivers Historical Society works to preserve the heritage of the cities which grew at the confluence of the Salt, Gila and Agua Fria rivers - Goodyear, Avondale, Litchfield Park and Tolleson.