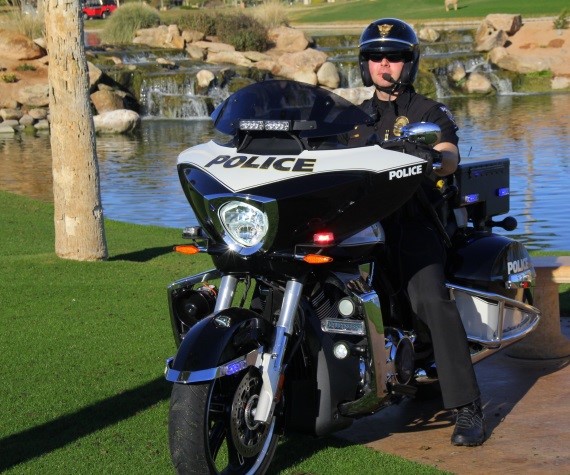 The main enforcement efforts of the motor and traffic units section are speed violations, seatbelt violations and child seat violations. The motor units have the ability to enforce the speed and passing violations in our school zones. They can position the motorcycles in places a patrol car could not possibly fit.

The Goodyear Police Department receives many calls at all hours of the day of reckless, aggressive and impaired drivers. When patrol units arrive in the area they have an almost impossible task trying to identify an aggressive, reckless or impaired driver. One reason is that a person's driving behavior typically changes when they perceive a police vehicle is in the area.

According to a National Highway Traffic Safety Administration (NHTSA) survey on aggressive driving attitudes and behaviors, more than 60 percent of drivers see unsafe driving by others, including speeding, as a major personal threat to themselves and their families. More than half admitted themselves to driving aggressively on occasion. Examples include speeding or driving too fast for conditions, improper lane changing, and improper passing.

Aggressive driving behavior is responsible for thousands of deaths and injuries throughout the country each year. The Phoenix Metropolitan area has continued to see a rise in these types of incidents. The term "aggressive driver" is applied to a specific behavior by individuals who drive with little or no regard for safety. To address the issue of aggressive driving, a concentrated enforcement effort and public awareness campaign are necessary.

The Arizona Legislature passed A.R.S. 28-695, an Aggressive Driving law in 1998. This law targets the types of violations that have been attributed to aggressive drivers:

The method of detecting and taking enforcement action against aggressive drivers is to utilize an unmarked police vehicle for traffic patrol. By utilizing a vehicle that has no outward appearance associated with a traditional patrol car, an officer can observe the normal driving habits of motorists. A goal is to let the aggressive driver be aware that any vehicle on the road may stop him/her and issue a citation. He/she may modify their driving behavior in general, not only when a patrol vehicle is visible.

By actively searching out and issuing citations and/or arresting aggressive drivers, it is anticipated that incidents of "road rage" can be reduced. Since the public has expressed fear and concern over the violence associated with road rage tragedies, knowledge of the program may reassure the citizens with the Goodyear Police Departments efforts to combat the problem.

What to do if you are confronted by an aggressive driver

People who drive aggressively and disregard the safety of others on the road can escalate into a ROAD RAGE incident. Because of this, The Goodyear Police Department and NHTSA recommend that you:

If you have a cell phone, and can do so safely, call the police.

Send an Email to the Traffic Unit