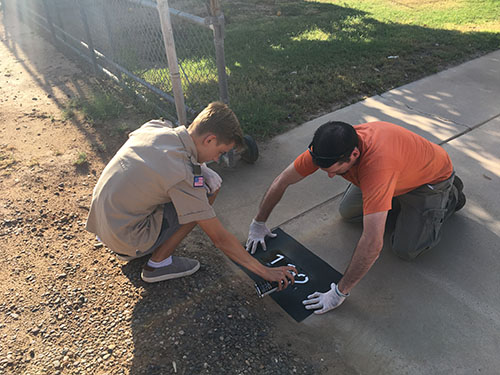 For his Eagle Scout project, 14-year-old Christian Larkin wanted to do something special for his city.

“I researched stuff online, and I was like, well, what better place to find a project than the City of Goodyear?” he said.

That’s why Larkin, who attends Odyssey Preparatory Academy in Goodyear, decided to paint fresh new house numbers on curbs and alleyways in Historic Goodyear. The project will allow police and fire to locate homes more quickly in emergency situations.

“They can just look at the freshly-new painted curb or alley wall and just be like, bam, that’s the house,” Larkin said.

Larkin’s project consisted of two steps. First, he placed door hangers on each home in Historic Goodyear to inform residents of his project and allow them elect to accept or decline his service. Then, he cut out cardboard boxes for stencils, bought black and white paint, and gathered over 30 volunteers to paint numbers at each residence that requested the service.

“I thought it was really satisfying seeing us take off the numbers and the background stuff after it was done,” Larkin said.

The project was so popular that many residents who might have missed Larkin’s door hanger came out of their homes to request that his volunteer group paint their curb, as well.

“When they came around to do it, obviously we said, 'Yes, we want the numbers painted,'” Historic Goodyear resident Mary Larsen said. “I love the way it looks. He was a very nice young man.”

Larkin is currently a Life Scout, but his successful project means he’s one step closer to becoming an Eagle Scout.

“I felt special being connected to the City of Goodyear and doing this,” he said. “It was a good project.”